NCC and Hexham Council are prioritising LCWIPs which are Local Walking and Cycling Infrastructure Plans.

Cycling and walking is now covered by LCWIPs which have short term goals: < 3 years, medium term, 3-5 years and long term, > 5 years. It is envisaged that they will need reviewing and updating every four to five years and will also need reviewing if something significant happens in the area.

At this time the Local Transport Plan (LTP) is in process of being agreed which will set out the county’s transport plans for the next 3 years. If a proposal isn’t in this plan, it’s very unlikely it will be considered. Priority is given to the top 3 proposals from each parish or town council which are usually car-orientated. Walking and cycling are slowly moving up the agenda but are still seen by some as being less important than improvements for vehicles.  To get an item into the top 3, walkers and cyclists must combine to make a strong case to their council and keep on pressing until they take notice and give well thought-out proposals serious consideration to the extent they are included as at least one of the three items put forward for inclusion. To a large extent LCWIPs have superceded this but its early days for the new approach hence the overlap.

Currently NCC and Hexham Town Council are looking to improve several aspects of sustainable travel in and around Hexham including improving the link between Hexham and Corbridge. A small group of volunteers have just cleared a path along the line of the red dashes and have invited NCC, the majority landowner, to take over the project and create a 1.5 m wide made-up path with support and cooperation from several community groups to keep tidy and provide oversight.

The behind the wall path route has been cleared and opened out by volunteers. All litter has been collected and disposed appropriately in the nearby recycling unit. No trees were felled, before nesting time, only low overgrowth was cut back and dragged clear as per the permission granted by NCC; no branches above head height or foliage was removed. There are several short thick bramble stalks attached to strong root systems that need to be removed from the south end after which the path could safely be used informally – subject to agreements on a few outstanding issues.

Several community groups are aware of the path and support it but it has not, and will not, be promoted for public use until all permissions are in place and all trip hazards have been removed.  Its believed the new 220m path will be well used and enjoyed by walkers, off-road cyclists including families with small children on bikes or in push chairs, the occasional horse rider, runners and, it is hoped, by mobility scooters – if surfaced with Flexipave or similar.

The new path will distance VRUs (vulnerable road users) from Rotary Way and its associated traffic volume, traffic speed, traffic noise and traffic pollution. A further benefit is that when coming out of Hexham, path users will begin to enjoy rural ambience and being close to nature much earlier and enjoy both those aspects longer when entering Hexham.

In conclusion, the Government is slowly waking up to the importance of substituting short car journeys by walking and cycling. The well documented benefits are many and are rarely dismissed but people do not like change and any combination of proposals to make travel safer for VRUs usually upset the motoring lobby which is large and vociferous. Oddly in life, the people who have the most to lose invariably fight harder to oppose change than those with the most to gain from that change. 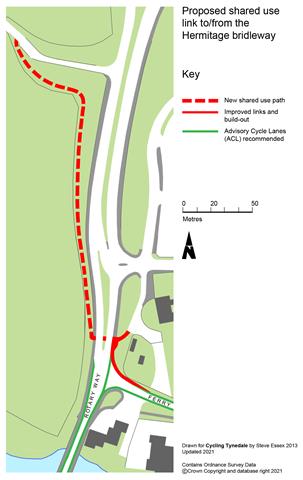