Three planning applications have just been lodged with Northumberland County Council for works associated with the Goods Yard redevelopment, (as initially reported in the Hexham Civic Society Summer Newsletter). These are: 12/02918/CON; 12/02917/FUL  and 12/02903/LBC. They are described as “Hybrid planning application seeking Full planning permission for station improvements, the erection of three retail units and the use of the Prosser building for retail purposes and outline planning permission for the erection of units for use within Use Classes B1,B2 and B8. Demolition of 3 existing buildings on site. Hexham Goods Yard, Hexham Train Station Loop Hexham Northumberland”.

HCS raised its concerns about the initial ‘draft’ designs that were tabled at a public exhibition on the 5th July at the Wentworth Leisure Centre. Although we are supportive of the general improvement of the derelict Goods Yard area, and of the improved access proposed by Network Rail to the north of Hexham Station, we shared the concerns of many that the tabled proposal was a generic set of ‘big boxes’, which failed to respect their Conservation Area/Listed Buildings context, and failed to take the opportunities that this key site provides.

We made our views known to the developers Rokeby, to Walsingham Planning (consultants for Rokeby); and to NCC via Karen Ledger (Development Manager). As we reported in our newsletter concerns focused on:

Others have voiced wider concerns over the economic impact of these new units on small businesses within the town centre,  but HCS has not commented directly on this issue. 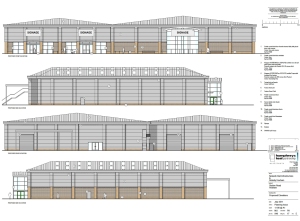 As ever, our comments were constructive and designed to help bring about a better solution both for the developers and for Hexham residents, who are left with the results of planning decision long after developers have backed off to their next project. We do not wish to see a development that fails to make best use of the site and which rides roughshod over its conservation area context with an ‘anywhere’ scheme fit only for the Team Valley.

We are therefore extremely disappointed that the scheme now put forward for planning permission is virtually identical to that tabled at the pre-application stage,. The application also makes clear that the development will not deliver any physical improvements to the fast deteriorating Station buildings (Grade II) such as the Water Tower (Indicative referred to in the pre-app as a site for Theatre Sans Frontieres); the decaying and long-scaffolded Station interior, or the supposed units for local employment tucked at the very back of the site. These are indicatively identified as a ‘future phase’ and will be unlikely to be ever built.

A derisory Heritage Statement and Design and Access Statement explain how marvellous the scheme is, and how it will contribute to the character of the Hexham Conservation Area. Token improvements arising presumably from the consultation are limited to a handful of trees and a zebra crossing to the site from Hallgarth. Pedestrians are then expected to trail an additional 50m to the vehicular entrance to the site rather than take the ‘desire line’ which is on the south west corner of the site.

You can view full plans on the NCC website at: http://publicaccess.northumberland.gov.uk/online-applications    Hexham Civic Society will be OBJECTING to the proposals which we feel fall very short of an acceptable proposal for this key site. We consider that the supposed pre application consultation was largely a PR exercise, and that NCC needs to take an extremely robust stance on this proposal if it is to secure an adequate scheme that addresses the basic concerns which we have voiced.

We would encourage TT members and others to view the application and to come to their own opinions, and to make their views known in the next few weeks to NCC. NCC can be contacted via the above site or directly (quoting application reference numbers) at: West.planning@northumberland.gov.uk
Post : Development Management, Northumberland County Council, Planning Department, Old Grammar School, Hallgate, Hexham, Northumberland, NE46 1XA

View all posts by rogerhiggins73